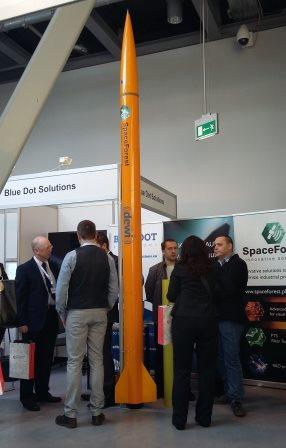 In aeronautics, there are two main concerns: weight reduction and safety. Therefore, within DEWI project, wired sensors on-board of a flying sounding rocket will be replaced to reduce weight. Also, important data regarding operation in harsh environments (extreme temperatures, pressure, radiation, and speed conditions) will be collected to increase safety. You can find more information about this topic here.

Since the removal of wires and the use of WSNs (Wireless Sensor Networks) instead can reduce the overall weight, the DEWI target WSN prototype includes 30 nodes and is organized in 4 subnetworks. In addition, wireless technology provides improved troubleshooting and easier re-configuration when needed. SpaceForest aims at creating a demonstration rocket that combines these demands.

In the beginning of 2015 the WSN prototype, named “CANDLE2”, made its maiden flight to an apogee of about 2700 meters by using only half of its propulsion system capability. Due to parachute malfunction, the rocket was damaged and had to be repaired. Also, that event proved that it can be useful to prepare another auxiliary rocket for testing subsystems for the final demonstrator. For this purpose, the rocket “BIGOS2” was designed and manufactured. It was not only launched several times for testing the rocket subsystems in lower altitudes and at lower costs, but it has also been preliminary tested “on the table” in laboratory conditions.

After the validation, all Wireless Sensor Nodes have been mounted onboard the target “CANDLE2 rocket”. These integrated systems have been tested in an anechoic chamber in the facilities of Gdansk University as well. The radio-frequency based estimation methods were implemented and initially validated, together with inertial estimation.

A supersonic, full-scale test flight of the advanced version of rocket “CANDLE2” is planned for the end of April 2016.

Most recently the CANDLE2 Rocket has been exposed in the Blue Dot Solutions exhibition box during the SPACE SECTOR FORUM 2016 (http://space.biz.pl/main/). DEWI multimedia materials have been presented there and the Artemis goals and DEWI activities have been widely explained among the participants.